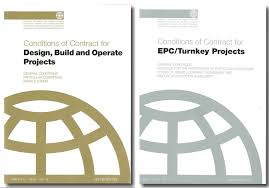 The Books in the new suite are all marked ‘First Edition 1999’, and the reason is that they can not be regarded as direct updates of FIDIC’s very well-known and widely used ‘Red Book’, ‘Yellow Book’ and ‘Orange Book’, i.e. respectively:

Publication of the 1999 Books has aroused considerable comment. The Construction Contract, The Plant and Design/Build Contract and the Short Form appear to be generally well received by all parties. (These are popularly referred to as the ‘New Red Book’, the ‘New Yellow Book’ and the ‘Green Book’ respectively because of the colour of their covers.) The EPC/Turnkey Contract, (the ‘Silver Book’), has, however, not unexpectedly, received a mixed reception. There has been considerable positive comment, and several positive articles, but, while some interested players seem so far to have remained cautiously silent, there are a number of contractors and lawyers who have been vociferous in their protests.

Conception of the Silver Book FIDIC established in 1994 its Red Yellow Update Task Group (the Task Group) with mandate to update the existing Red and Yellow Books. The Orange Book was about to be published (1995) so the Task Group did not envisage digressing into the sphere of design-build/turnkey projects (except to harmonise as far as possible with the Orange Book). However, during early considerations in the Task Group of the use of the different international and national standard contract forms and of the various methods of procurement around the world, it was realised that, even if the Red and Yellow Books were being used widely, there were a great many construction contracts in many countries which were not procured nor managed along the principles set out in the Red and Yellow Books. At that time it was by no means the BOT type, privately financed projects that were uppermost in the Task Group’s considerations. While these were increasing, it was more the conventional type that the Task Group felt were falling outside the Red/Yellow Book scope.

Such projects included all those where employers in many countries took the Red or Yellow Books (to save themselves the trouble of doing their own drafting) and struck out the word ‘Employer’ in some or all of the clauses where FIDIC had placed some obligation on the employer, and replaced it by the ‘Contractor’. Such contracts were then not ‘FIDIC contracts’ as the even balance of risks for which FIDIC’s Books were renowned had been changed. Other projects were those without the traditional ‘Engineer’. The Anglo-Saxon concept of the independent, trustworthy, almost ‘venerable’ Engineer, guiding the project and deciding on right and wrong has never been understood or accepted in many countries, for example many civil law countries, and there the direct two-party system of Employer – Contractor always has been the norm. The ‘Engineer’ concept has also often been ridiculed by lawyers and others who cannot understand how someone paid by one party can be fair to the other party, and the fact is that for many projects nowadays the person delegated to be ‘the Engineer’ has no chance of actually carrying out his duties impartially.

One of the main reasons for many employers’ attempts to pass as much risk to their contractors as possible stems from the inflexible budget requirements of their organisations. This also leads to their shackling of the ‘Engineer’ or his equivalent who supervises the construction work. FIDIC’s traditional balanced risk-sharing has meant that the Contractor has taken the construction and other risks which he can reasonably estimate, while the Employer has taken the risks of the unforeseen and other circumstances which cannot reasonably be reckoned in advance. In this way an employer pays extra only when such circumstance arises, and does not pay a premium estimated by the contractor to cover the risk of such circumstances. This leads to a lower contract price (i.e. without the premium) in the majority of cases, a higher price being paid only in those cases when unforeseen circumstances actually occur.

If the Employer considers himself to be entitled to any payment under or in connection with the Contract, and/or to any extension of the Defects Notification Period (the new more correct name for the Defects Liability Period), he must “give notice and particulars” to the Contractor. The particulars must “specify the Clause or other basis of the claim, and shall include substantiation of the amount and/or extension to which the Employer considers himself to be entitled”. The notice shall be given “as soon as practicable after the Employer became aware of the event or circumstances giving rise to the claim”. The Employer is expressly denied the right “to set off against or make any deduction from an amount due to the Contractor, or to otherwise claim against the Contractor” except in accordance with this provision. [Sub-Clause 2.5].

The Contractor’s right to adjustment of the Contract Price to take account of any increase or decrease of Cost (as defined) resulting from a change in law in the country where the site is located has been extended (beyond “changes in legislation”, as in e.g. the Orange Book) to include changes “in the judicial or official governmental interpretation” of laws made after the Base Date (as defined), which affect the Contractor in the performance of his obligations. [Sub-Clause 13.7].

If the Contractor is not paid on time, the Contractor is entitled to receive “financing charges compounded monthly on the amount unpaid during the period of delay”. Unless otherwise stated in the Particular Conditions, these financing charges are to be calculated at the annual rate of three percentage points above the discount rate of the central bank in the country of the currency of payment, and should be paid in such currency. [Sub-Clause 14.8]. This provision is derived from the Orange Book. While the old Red Book provided that the Contractor was entitled to interest on late payments, it did not specify how this was to be calculated.

Within 42 days after receiving a claim or any further particulars supporting a previous claim, the Employer is now expressly required to “respond with approval, or with disapproval and detailed comments” [Sub-Clause 20.1]. Under the old Red Book, there was no express requirement that the Engineer or Employer respond to the Contractor’s claim at all, except in the case of a dispute [Clause 67].

Under the General Conditions of the new Books for major works, disputes are now required to be submitted to a Dispute Adjudication Board (DAB) for decision. In the case of the new Red Book, the DAB must be appointed at the time the Contract is signed and remain in place until it is concluded. In the new Yellow and the Silver Books, a DAB is appointed for each dispute and ordinarily only remains in office until that dispute is decided [Sub-Clause 20.2]. Under the old Red and Yellow Books, disputes had to be submitted to the Engineer for a decision, as a condition of arbitration. The provision of the DAB to replace the Engineer for the settlement of disputes may be the most favourable of the innovations of the new Books from the Contractor’s point of view.

Permanent link to this article: http://www.e-basel.com/fidic-rainbow-suite/fidic-silver-book/