Can a contractor challenge the liquidated damages ?

Can a contractor challenge the liquidated damages ? 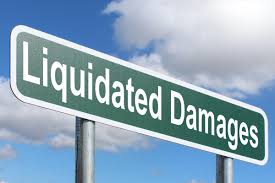 What are liquidated damages?

Sum of money (agreed-to and written into a contract) specified as the total amount of compensation an aggrieved party should get, if the other party breaches certain part(s) of the contract. The contract also establishes what actions or failures to act constitute a breach. For the agreement to be legally enforceable, the nature of the contract should be such that it is difficult to determine actual damages, and the amount of damages should be reasonable under the circumstances. Otherwise law may regard the specified amount as a fine (included in the contract primarily to force its proper performance) and not a compensation for injury.

Can a contractor challenge the liquidated damages figure included in contract as being a penalty and unenforceable after the contract is signed?

A golden rule when interpreting both parties are bound by the terms of the contract into which they enter. With this in mind, can a contractor, having signed the contract which includes a sum for liquidated damages, later challenge the figure as being penalty? Liquidated damages are not usually challenged on the grounds that they represent a penalty until they are levied, or there is a threat to have them levied.

A contractor who enters into a contract which contains a liquidated damages figure can, at a later stage, challenge the amount as being a penalty and unenforceable. However, where he makes such a challenge, it is up to him to demonstrate that the amount is a penalty and not a reasonable pre-estimate of the employer’s loss. It is not for the employer to justify the figure.

It is an established principle that for liquidated damages to be enforceable, the sum claimed should be genuine pre-estimate of anticipated loss. From this, contractors often argue that organizations such a health authority, education trusts and the like are financed from the public purse and as such can never suffer loss. This argument, if successful, would be unsavory to any right-minded person.

Is it possible to include in a subcontract an all-embracing sum for liquidated and ascertained damages for delay to completion?

It is common practice for a daily or weekly rate to be included in a standard main form of contract in respect of liquidated damages. These damages become payable by the main contractor to the employer in the event of a delay to completion of the works.

The sum for liquidated damages must be a reasonable pre-estimate of the loss the employer is expected to incur should the work be completed late.

It is rare, however, to find a standard form of subcontract which includes provision for the deduction of liquidated damages should the subcontractor complete late.

One of the difficulties for the subcontractor is that, when pricing for the work, he has no idea what the financial liability will be in the event of his late completion.

Permanent link to this article: http://www.e-basel.com/articles/can-a-contractor-challenge-the-liquidated-damages/