What is an arbitration agreement?

the Arbitration Agreement is a written contract in which two or more parties agree to settle a dispute outside of court. The arbitration agreement is ordinarily a clause in a larger contract. The dispute may be about the performance of a specific contract, a claim of unfair or illegal treatment in the workplace, a faulty product, among other various issues. People are free to agree to use arbitration concerning anything that they could otherwise resolve through legal proceedings. 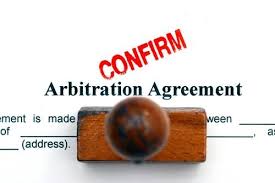 The Arbitration Agreement can be as simple as a provision in a contract stating that by signing that contract you are agreeing to arbitration in the case of any future disputes. For example, a business owner can ensure that potential dispute costs remain low by requiring anyone doing business with them to sign an agreement to arbitrate instead of litigate–to settle the matter out of court.

In arbitration, a trained, professional, and neutral arbitrator acts as a judge who will render a decision to end your dispute. Arbitrators are often retired judges, but that doesn’t mean they follow traditional legal procedures to the letter. Arbitration is actually a highly flexible process whose ground rules are open to negotiation

As compared to a lawsuit, arbitration is relatively inexpensive, brief, and confidential. The courts usually refuse to overturn arbitrated decisions and can step in to make sure they are enforced. This means that arbitration lead to final outcomes that allow parties to move forward, while also avoiding the public scrutiny that can accompany a court trial.

In addition, arbitration allows for more creative rulings than civil courts can issue. If you sue your former employer for wrongful termination, for example, the court can award you only monetary damages, according to Cole and Blankley. By contrast, in addition to (or instead of) awarding damages, an arbitrator could order the company to reinstate you.

That is why the parties may define the subject matter of the arbitration by reference to the relationship out of which it derives. The submission agreement refers to conflicts that have already arisen. Hence, it can include an accurate description of the subject matters to be arbitrated. As we shall discuss later, some national laws require the execution of a submission agreement regardless of the existence of a previous arbitration clause. In such cases, one of the purposes of the submission agreement is to complement the generic reference to disputes by a detailed description of the issues to be resolved.

In sum, companies or their counsel should not reflexively choose arbitration. Due consideration should be given to the benefits of an arbitration , as well as the risks . Ultimately, a company or its counsel should not hesitate to negotiate a modification to a standard arbitration provision to better suit the needs of the company’s business.

A similar analysis may be employed when a party brings litigation, despite the fact that a contract contains an arbitration clause, and the adverse party must decide whether to seek to enforce the arbitration clause.

Read More About the Agreement to Arbitration.

agreement to arbitration is mandatory in all Arbitration/ ADR cases. for more information about DIAC center please visit the website www.diac.ae

The parties, entering the contract and wishing that the disputes that may arise in the future are referred to the Arbitration Court according to the ICAC Rules, are recommended to include the following arbitration clause (words or blanks in square brackets should be removed or filled out correspondently) into the contract:

“Any dispute arising out of or in connection with this contract, including any question regarding its existence, validity or termination, shall be referred to and finally resolved by the International Commercial Arbitration Court under the European Arbitration Chamber (Belgium, Brussels, Avenue Louise, 146)  according to the Rules of this ICAC, which, as a result of referring to it, is considered as the part of this clause.

The number of arbitrators shall be- [one / three].

The seat, or legal place, of arbitration shall be [city and/or country].

The language to be used in the arbitral proceedings shall be [___].

The governing law of the contract shall be the substantive law of [country].”

“Dispute having arisen between the parties concerning [ ], the parties hereby agree that the dispute shall be referred to and finally resolved by the International Commercial Arbitration Court under the European Arbitration Chamber (Belgium, Brussels, Avenue Louise, 146), according to the Rules of this ICAC.

The number of arbitrators shall be- [one / three].

The seat, or legal place, of arbitration shall be [city and/or country].

The language to be used in the arbitral proceedings shall be [___ ].

The governing law of the contract shall be the substantive law of [country].”

Permanent link to this article: http://www.e-basel.com/arbitration-dispute/agreement-to-arbitration/