It seems a logical starting point to suggest some of the steps that may be taken by Contractors to avoid getting into a dispute situation in the first place. 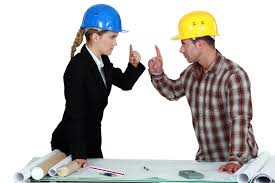 • Delays and extensions of time

• Failure to adequately document the works

Standard forms of contract The majority of construction contracts are in a standard form published by various organizations — Master Builder’s Association, Housing Industry Association, Royal  Australian Institute of Architects, Property Council of Australia, Standards Australia, various State and Federal Governments and even banks and finance organizations sometimes separately and sometimes as joint publications. These can be bought from the various organizations, with some now available from their websites.

The language used in these contracts ranges from high legalese through to straightforward English using layman’s terms. The contracts all cover the same basic information, if in different ways.

Common areas in most contracts include:

• a method of dealing with changes to the time frame, for whatever reason

• methods of the builder making a claim for payment

• methods for dealing with a failure of the client to pay

• methods of pricing and paying for the addition or reduction in workload.

In addition to these, other items may include the process of dealing with a builder who fails to adequately advance the progress of the works and bankruptcy on the part of the builder or client.

Format of the contracts

Most contracts now have two distinct sections. The first part is the printed section containing the standard clauses setting out the parameters of the obligations of both parties. The second part is blank with various clauses relating to the matter in the main part of the contract. It is the second part that is most important , this is where the actual way that matters as listed above may be specified.

It is failure to take care with this second section of the contract that often leads that which should be a readily resolved problem, into a full legal dispute.

This frequently comes about through an inadequacy to correctly fill in the various details.

Adhering to the following requirements will help avoid potential problems:

• Ensure that both parties sign the contract and have it witnessed. Again this should be done with all the parties present. Unsigned copies create unnecessary difficulties.

• Ensure the date is written into the contract. Leaving this out, or having different dates in different copies makes determination of the completion date that much more difficult.

• Fill in all the relevant dates, especially if there are to be staged handovers.

• Where provided, ensure that ALL the relevant documents included in the contract are listed, for example drawings, specifications and where they exist and the status of the Bill of Quantities.

• Where there is provision for additional items to be inserted, either include them or write ‘not applicable’ (rather than ‘n/a’).

Finally, it is wise to have your lawyer check the various requirements of the contract conditions, and explain to you the various implications and obligations that this contract will place on you, before filling in and signing the contract. It is too late if you find out later that the contract contains conditions you either did not understand or expect. The law will generally accept that if you sign the contract, subject to specific conditions, you agreed to and understood the contract that you signed.

Where a contract is specifically drafted for a project it is essential that the parties seek advice from their own lawyers. The recommended practice is to use lawyers who have a specialty in construction contracts.

As well as the main contract document, the full range of contractual documents consists of:

• The plans or drawings

• The Bill of Quantities or Schedule of Rates and so on.

Each document carries a potential dispute. However, if we ignore the actual content for a moment, there are a couple of simple things that can be done to minimize the possibility of disputation.

It may seem obvious, but if a builder contracts for a project, the standard of work required as set out in the contract documents or in other documents accepted by the construction industry must be provided. The client has established these standards and has a contractual right to expect that the contractor will meet these. Most tolerances and acceptable levels of work are specified in building codes or standards. Indeed, it may be useful to consult the Handbook of Building Construction Tolerances.

I am referring to deliberate variations (or extras) to the original contract as often requested by the client, but which are also sometimes necessary to enable the works to be completed on time. Builders need to be aware that by and large, work performed but not included in documentation may not form a legitimate variation. The law has long established that the builder is contracted to carry out the works and is responsible for its completion.

Delays and extensions of time

Very few contracts for construction will be both commenced and completed on the exact day anticipated in the contract. This is largely a result of natural elements, including wet weather preventing work in the open and the subsequent problems such as access to the site, flooded footings and so on.

Latent conditions — or the hidden snags

Like hidden snags in water, latent conditions are those items that cannot be seen on a normal inspection of the site or works and would not normally be expected. These range from differing soil conditions — water, rock and so on — through to hidden water or gas pipes in walls or even acid in old holding tanks. Once again the essential action by the builder, when this situation is encountered, is to notify the client in writing. In this case the builder may need to receive instructions as to what should be done, but in circumstances

where the builder cannot wait, clear documentation as to why and what has been done is essential.

Failure to adequately document the works

Arbitrators nominate inadequate documentation as a major cause of building disputes. A growing tendency is for the client to spend as little as possible in the preparation of the documentation, leaving more and more to the builder to resolve. It is widely accepted that the more extensive the detailing and documentation, the less chance there is for misunderstanding of the client’s intentions and thus mistakes by the builder. The skill and knowledge of the technology of construction by the builder will always be required, as every detail cannot be economically (or even reasonably) included in the drawings or specification. It is also true to say that if a given detail is open to interpretation, in most cases there will be more than one interpretation possible.

The simplest solution is to adequately document the works at the start of the building process. This benefits all parties concerned:

it lessens the chances of misinterpretation on the part of the builder and thus the need to impose a cost burden; and it increases the chances of the client being given a more realistic time frame. There is not much that the builder can do with poor documentation supplied on behalf of the client, except to price the work to cover the inevitable problems ahead.

Many disputes are related to the failure to establish ‘facts’. A good site diary where all relevant information is recorded is a prime source of facts when a matter is in dispute. Data should include a record of all people working on the site, from direct labour to subcontractors, as well as visitors to the site, work being undertaken and the recording of all instructions received and actions taken on those instructions.

It is recommended practice to store a copy at the head office for future use if necessary. In this day and age, the use of computers and emails can replace the written page, but proof of authenticity is that much harder.

The following is a brief summary of the steps that can be taken to help reduce the chance of construction disputation.

• Always fill in the blanks in a contract, especially those regarding dates and finances

determined and approved, where possible, prior to undertaking the work

money and time wasted in arguments and disputes

any influence on that project.

Permanent link to this article: http://www.e-basel.com/articles/avoiding-disputes/