Conditions of Contract for 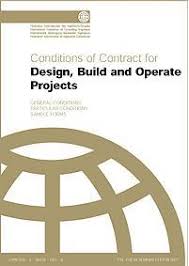 Following publication of the Orange Book in 1995 and the Red, Yellow and Green Books in 1999 it became clear that there was a growing need for a contract combining a design-build obligation with a long-term operation commitment.

The approach and layout of the DBO contract is more similar to the FIDIC Silver book than any other contract within the FIDIC suite.

The DBO contract adopts a “green-field” DBO scenario with a 20 year operation period and a single contract awarded to a single contracting entity (which will almost certainly be a consortium or joint venture) to optimise the coordination of innovation, quality and performance, rather than award separate contracts for design-build and for operation.

Under the DBO contract the Contractor has no responsibility for either financing the project or for its ultimate commercial success.

The DBO contract, as written, is not suitable for contracts which are not based on the traditional DBO sequence, or where the Operation Period differs significantly from the 20 years adopted.

The document is recommended for general use where tenders are invited on an international basis.

The contract attempts to include all conditions of a general nature, which are likely to apply to the majority of DBO contracts, as General Conditions.

The demand for public infrastructure at a time when public purse strings are tight, coupled with a lack of public sector expertise in delivering complex facilities (such as water treatment plants and energy plants), has lead to an increase in the involvement of the private sector in the procurement and operation of public infrastructure.

There are a wide range of possible arrangements for involving public sector risk and expertise in the procurement of public infrastructure. One of these arrangements is Design Build Operate (DBO). It is particularly popular for water treatment plants.

DBO involves a government (often in the form of a government body or local authority) engaging a single contractor to:

Permanent link to this article: http://www.e-basel.com/fidic-rainbow-suite/fidic-dbo-contract/