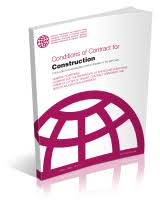 The Red Book is divided into three sections, namely:

(both ‘on demand’ and ‘upon default’) and Advance Payment Guarantee

Perhaps the most noticeable change with respect to claim submissions is that employer’s claims are now addressed alongside contractor’s claims in Clause 20, with the same procedure and requirements applicable to both. What was previously Clause 20 (“Claim, Disputes and Arbitration”) under the 1999 Conditions of Contract has now been significantly expanded and separated into two separate clauses, Clause 20 (“Employer’s and Contractor’s Claims) and Clause 21 (“Disputes and Arbitration”).

Both the employer and contractor are now subject to the same time limits and time-bars for claims, including the familiar 28-day “Notice of Claim” time limit (Sub-Clause 20.2.1) and an increased 84-day time limit for submission of the “fully detailed Claim” (Sub-Clause 20.2.4).

The new Sub-Clause 20.2.4 describes the required content of the “fully detailed Claim”, which the parties now have twice as long to prepare, and which must include “a statement of the contractual and/or other legal basis of the Claim” (Sub-Clause 20.2.4(b)). If the claiming party fails to state the contractual or legal basis for its claim, the claim may be deemed to have lapsed, unless the claiming party is able to justify the late submission.

Subjecting employer and contractor claims to the same requirements under the Revised Conditions seems to have been intended to increase fairness. However, this may create a less fair situation for the employer, which may not have the necessary organisational structure to handle claim management, especially where the employer is carrying out a one-off project.

Clause 20 also includes a new requirement for the engineer to notify the claiming party within 14 days of receipt of the Notice of Claim if the engineer considers the claim time-barred (Sub-Clause 20.2.2, “Engineer’s initial response”).

If the validity of the Notice of Claim is disputed by the engineer or other party, the claiming party must include “details of [its] disagreement or why such late submission is justified” in its fully detailed claim (Sub-Clause 20.2.2). The engineer’s determination must then include a decision on the issue of whether the claim is time-barred (Sub-Clause 20.2.5). In effect, the engineer must take a decision on what could be considered a largely legal matter. This reflects the trend of engineers receiving contract management education as part of their professional training, as do the more detailed provisions for engineer determinations under the Revised Conditions.

Under the Revised Conditions, the engineer is intended to be very involved in contemporaneous claim resolution. The new Sub-Clause 3.7 (“Agreement or Determination”) sets out a more detailed procedure for the engineer to determine claims and insists that the engineer must “act neutrally between the Parties” and shall not be deemed to act on the employer’s behalf when making determinations. In the same vein, the employer may not require the engineer to obtain prior consent before issuing determinations (Sub-Clause 3.2). Such neutrality was already implicit in previous editions, but has now been made explicit, most likely to counteract observed abuses.

The engineer is required to “encourage discussions between the Parties in an endeavour to reach agreement” (Sub-Clause 3.7.1). If no agreement is reached, the engineer proceeds to issue a determination.

If the engineer does not issue a determination within the time limit (i.e., 42 days or another period agreed between the parties), or if either party is dissatisfied with the engineer’s determination, the parties may proceed to the dispute resolution procedure under Clause 21, described below (see Sub-Clauses 3.7.3, 3.7.5(d), 21.4.1).

All three Revised Conditions – the Red Book, Yellow Book and Silver Book – now provide for standing dispute adjudication boards, in place for the duration of the Contract (under the 1999 editions, only the Red Book provided for a standing board, with ad hoc boards under the Yellow and Silver Books).

These revisions are aimed at emphasising the importance and value of dispute avoidance. Reflecting this priority, the “Dispute Adjudication Board” or “DAB” has been renamed the “Dispute Avoidance/Adjudication Board” or “DAAB” (Sub-Clause 1.1.22). In addition, the new DAAB Procedural Rules state explicitly that the first objective of the DAAB is “to facilitate the avoidance of Disputes” (Rule 1.1(a)).

Under Sub-Clause 21.3, the parties may jointly request the DAAB to “provide assistance and/or informally discuss” in an attempt to resolve issues, i.e., exercising a mediation function. The new DAAB Procedural Rules also require the DAAB to regularly meet with the parties and/or visit the site outside the context of any formal proceedings (Rule 3). The advice given by the DAAB is, at least in principle, not binding in subsequent DAAB proceedings.

The appointment of DAAB members and the enforcement of their decisions have been made easier under the Revised Conditions. Sub-Clause 21.2 sets out a procedure enabling the establishment of the DAAB, even when one party fails to participate or objects. The “appointing entity or official”, which is to be named in the Particular Conditions (now known as the “Contract Data”) may appoint members of the DAAB. In addition, the parties are deemed to have signed the DAAB Agreement.

DAAB decisions are immediately enforceable, regardless of whether a party objects. The provisions concerning the DAAB procedure have been amended to emphasize that DAAB decisions which have not become final and binding may nonetheless be enforced by separate arbitration proceedings (Sub-Clause 21.7). Where a DAAB decision requires payment, the DAAB may now require the receiving party to provide “appropriate security” for repayment, pending arbitration proceedings (Sub-Clause 21.4.3).

Permanent link to this article: http://www.e-basel.com/fidic-rainbow-suite/fidic-red-book/